A number of reviews of the role on omega-3 fatty acids in cardiovascular disease have been published with conflicting conclusions and generated news headlines such as “More Evidence That Omega-3 Supplements Don't Work.” But are supplements really of no benefit? The answer provides interesting insight into nutritional science.

It has been well established for some time through epidemiological studies that higher dietary fish and omega-3 consumption is generally associated with a lower risk of heart disease (1,2). Higher blood levels of omega-3 fatty acids have also been associated with a lower heart disease risk (3,4). And there are many biological explanations for why dietary omega-3 may improve cardiovascular health with evidence to show that they lower plasma triglycerides, resting heart rate, blood pressure and inflammation as well as improving vascular and cardiac function (5). With this evidence clearly favoring a beneficial effect of omega-3, why all the confusion?

The problem lies in the recent studies being analysis of existing randomised controlled trials (RCTs). About 20 or so studies have been conducted in which people were given either omega-3 or a placebo and examined over time to see if there was any benefit. But there are a number of difficulties with RCTs as a means of examining dietary nutrients, which helps explain why different analysis could produce such contradictory results (see table 1). 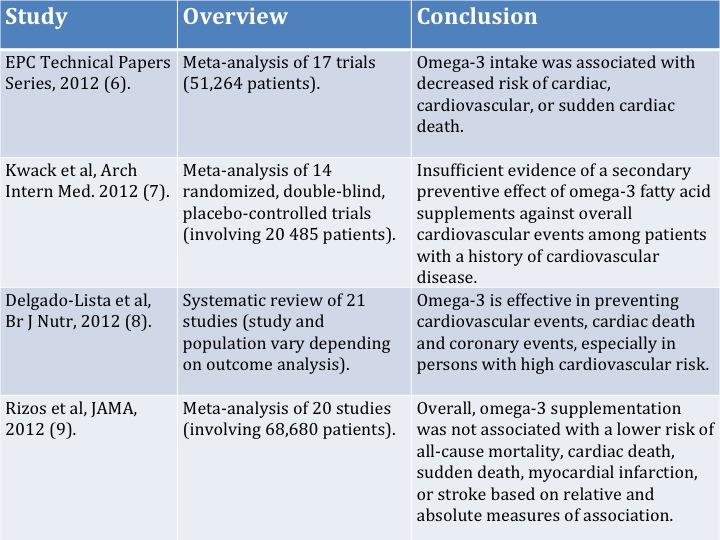 Rather than critique each individual analysis, let us examine some of the overarching issues concerning RCTs of omega-3 supplements:

With dietary nutrients there is often a threshold effect, meaning that if your intake is low you are more likely to benefit from increased intake and conversely if your intake is already high it is unlikely you will gain further benefit. The benefits of omega-3 consumption on cardiovascular health have been estimated to occur at an intake of about 250 mg EPA/DHA daily with little additional benefit observed above this threshold (10,6).

For example, a study conducted in Japan, where dietary omega-3 intake is about 900 mg EPA/DHA daily and 10 fold higher than western populations, found no effect of omega-3 supplements on mortality. By contrast a study in a European population with lower omega-3 intake reported reduction in total risk of cardiovascular death by 30% and sudden cardiovascular death by 45% (11).

Using a recent meta-analyses in the Archives of Internal Medicine (7) as an example; 5 of the 14 trials were, in fact, not truly placebo controlled but used olive oil (which has cardiovascular benefits) as a the control and one administered low-dose omega-3 fatty acids in margarine spread over multiple pieces of toast per day which, as it has been pointed out, could nullify any beneficial effects of the omega-3 (12).

Almost all of the most recent studies of omega-3 are statistically underpowered and unable to detect even modest benefits in cardiovascular outcomes. In other words there were not enough people in theses studies to be able to detect any benefit of omega-3 and they were not studied for long enough. Based on their size, the ability to detect a modest effect (e.g. 10% risk reduction) would be close to zero (13).

Compared to pharmaceutical drugs, dietary nutrients may have low effect sizes. This does not make them less important but needs to be taken into consideration when testing nutrients using RCTs, a method that is better suited to drug investigation (14). Although a recent JAMA analysis equivocally states there is no value of omega-3 they in fact found a trend towards benefit, showing a 9% reduction in cardiac death, a 13% reduction in sudden death, a 11% reduction in heart attacks and a 4% reduction in all-cause mortality (9). At a population level this would be highly significant.

The influence of nutrients on the development of chronic diseases such as heart disease may occur over long periods of time (many years). As an example, one large omega-3 intervention study did not detect differences in total mortality or cardiovascular events until after almost 4 years of treatment (17). However many recent studies are less than 1 year in duration.

7. Nutrients are not drugs.

Unlike drugs, nutrients are involved in the maintenance of normal physiological function across multiple body systems. This distinction was captured beautifully in an editorial in the British Journal of Nutrition; “Every tissue and every cell type is influenced not only by the genetically coded DNA-proteome but also by the dietary supply of essential fatty acids that determines how tissues and animals adapt to changing environments. The plasticity given by essential fatty acids is key to biological adaptations of every type (18).”

While RCTs and their subsequent analysis are important, they need to be placed in context and tempered with principles of nutritional science. Further, RCTs are only one line of evidence for determining the health effects of nutrients and should most certainly not be the only one (14).