Brahmi (Bacopa monnieri) is native to Australia and India and has a long traditional use in Ayurvedic herbal medicine. In 6th century texts Brahmi was described as being useful for sharpening the intellect and improving mental health. Ancient Vedic scholars are reported to have used Brahmi to aid in memorizing extensive sacred hymns and scriptures (1). Indeed extensive scientific research suggests great potential for Brahmi as a viable medicine for improving mental health and the prevention and treatment of age related cognitive decline.

Ayurvedic herbal medicines have a long history of traditional use for the treatment of nervous system disorders and improving cognitive function with age. Unlike synthetic drugs, which tend to have targeted pharmacological actions, traditional plants like Brahmi contain complex mixtures of phytochemicals that translate to wide-ranging biological effects (2). These diverse biological actions appear to play an important role in preserving and improving brain function making herbal medicines such as Brahmi excellent candidate treatments for illness that are themselves complex in their pathology (3).

Brahmi has several important neuroprotective effects, many of which have specific relevance to age related cognitive decline and Alzheimer’s disease. Brahmi has been shown to inhibit lipid peroxidation in the prefrontal cortex, striatum and hippocampus (4). Neuroprotective effects against neurotoxins such as Aluminum, morphine and cigarette smoke have also been observed (5-7). In experimental Alzheimer’s disease Brahmi reduced amyloid plaque by as much as 60% with simultaneous improvements in cognitive function (8).

Brahmi has been shown to improve cognitive function and mental capacity including enhancement of learning and memory acquisition and retention (9). A number of studies have explored possible mechanisms by which Brahmi may enhance memory and cognition.  There is evidence to suggest Brahmi can enhance cholinergic neurotransmission, a key aspect of cognition (10). In an Alzheimer’s disease model for example, Brahmi improved cholinergic neuron density (11). And Brahmi has also demonstrated anticholinesterase activity (12).

Neuroplasticity is a broad term that encompasses adaptive structural and functional changes that occur in the nervous system in response to physiological or pathological perturbations. These changes include the generation of new neurons (neurogenesis) and the formation of synapses (13).

In a remarkable study Vollala (2011) explored the effect of Brahmi on the morphology of neurons in the amygdala, a region of the brain associated with a range of cognitive functions, including emotion, learning, memory, attention and perception. Brahmi was able to improve spatial learning and memory retention and significantly increased in dendritic length and branching points of the neurons within the amygdala (14). In a parallel study the same research group also demonstrated a similar effect in neurons within the hippocampus (15).

Brahmi has demonstrated significant antidepressant activity. In an experimental model of depression the effects of oral administration of Brahmi were comparable to the anti-depressant drug imipramine (16). Another experimental study revealed anti-anxiety as well anti-depressant activity without any adverse effect on motor functions suggesting potential benefit of Brahmi in mixed anxiety-depressive disorder without causing sedation (17).

In a comparison with the benzodiazepine anxiolytic lorazepam Brahmi produced equivalent anti-anxiety effects. Brahmi however did not produce any significant motor deficit, which suggests that in contrast to lorazepam it is unlikely to result in sedation (18). An early study in patients with diagnosed anxiety neurosis reported a significant decrease in anxiety symptoms, level of anxiety, level of disability, and mental fatigue, and an increase in immediate memory span after treatment with Brahmi for 1 month (19).

A number of human clinical studies have examined the effects of Brahmi, most of which have focused on its cognitive enhancing activity (see table 1). A recent systematic review of 6 clinical studies concluded, “there is some evidence to suggest that Bacopa enhances memory free recall in non-demented subjects, and thus Bacopa could potentially be clinically prescribed as a memory enhancer (20).” The review highlighted a paucity of data in wider areas of cognitive function and pathologies such as dementia and Alzheimer’s disease. There is currently a 12-month study underway to test the ability of Brahmi to improve cognitive function in the elderly (21). 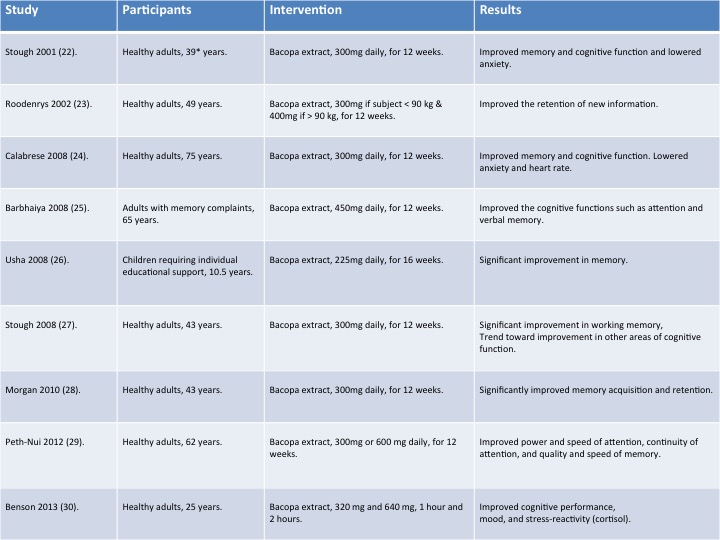 The ability of Brahmi to improve learning and behaviour in children and adolescents with attention deficit hyperactivity disorder (ADHD) is also of particular interest.  Usha (2008) suggested benefit in children requiring special education support, and there is currently a multi-center trial underway in which the effects of Brahmi are being studied in 6-14 year old boys with high levels of hyperactivity (31).

Preliminary human clinical evidence suggests an ability of Brahmi to reduce anxiety.  Notably Stough (2001) found that Brahmi reduced symptoms of anxiety in healthy subjects, with a pronounced effect after 12 weeks of treatment. In another 12 week study Calabrese (2008) found a progressive reduction in trait anxiety scores.  And most recently Benson (2013) found a trend towards reduced anxiety within 1 hour of a single dose.

The thousand year old use of Brahmi for as a brain tonic for improving learning, memory and intelligence has been reinforced by a number of human clinical studies and future research is underway to elucidate its role in treating age related cognitive decline.  The potential for Brahmi to improve learning and behaviour is also very encouraging as are its anti-anxiety and mood enhancing effects.