Non-pharmacological nutritional approaches are an effective and safe way to manage dyslipidemia, especially when used to target the underlying disease process or unique lipid fractions.

Not only are they better tolerated and with fewer side effects, a single nutritional intervention can target multiple disease processes and improve vascular health.

Dyslipidemia is a major risk factor for cardiovascular diseases (CVDs) including coronary heart disease (CHD), myocardial infarction (MI) and stroke. Mortality from CVD and stroke increases exponentially with age, accounting for over 40% of all deaths among people aged 65 to 74 years of age and almost 60% at age 85 years and older (1).

Dyslipidemia plays a fundamental role in the development of cardiovascular disease, and although the mechanisms are complex they have been proposed to be due to just three primary processes; inflammation, oxidative stress, and autoimmune dysfunction (8). Understanding the various steps in dyslipidemia mediated vascular injury can help in the development of a rational treatment approach toward reducing vascular damage, improving repair systems and restoring vascular health, especially within the framework of a systems biology, functional medicine based model (9).

Nutritional treatment of dyslipidemia has a number of potential advantages over drug therapy. Unlike medications, nutrients and foods tend to have few to no side effects and have important pleotropic effects. Several nutritional interventions have shown not only to result in important improvements in dyslipidemia, but also reduce inflammation, oxidative stress, and immune dysfunction. Further, there is evidence of important reductions mortality for dietary approaches and some nutritional supplements, as well as reduction in surrogate markers such as carotid intimal medial thickness and obstruction, plaque progression, coronary calcium, and endothelial dysfunction (7).

Amongst the more promising nutritional supplements for dyslipidemia are red yeast rice, tocotrienols, citrus bergamot and berberine (for a wider review see reference 6). Policosanol, although promoted for dyslipidemia, should not be used.

Red Yeast Rice (RYR) is a traditional Chinese fermented food that contains Monacolin K (Lovastatin) and other statin compounds and active ingredients (10). Several studies have found RYR to be effective at improving dyslipidemia, particularly for lowering TG and LDL-C levels and increasing HDL-C, and there is also evidence that RYR can significantly reduce risk of cardiovascular events and mortality (11). Clinical trials also suggest RYR may also be a suitable alternative for statin intolerant individuals (12,13). However, there is a high degree of variability in product quality, the possibility of adulteration or contamination with the toxic fermentation product citrinin and there are rare cases of myopathy with RYR use (14).

Tocotrienols are known to have a number of cardioprotective effects including potent antioxidant and inflammatory activity and the ability to inhibit HMG-CoA reductase, a rate-limiting enzyme in cholesterol biosynthesis (15). A number of human clinical studies have found improvements in blood lipid profiles, especially lower LDL-C, and LDL oxidation and reduced carotid artery stenosis progression after supplementation (16-19). There appears to be a dose dependent effect, with clinical trials and a dose-response study suggesting better effects with a daily 200 mg dose (20). In addition, tocotrienols appear to be more effective when used with healthy dietary changes (21).

A polyphenolic fraction derived from bergamot (Citrus bergamia) has been shown to result in highly significant improvements in dyslipidemia and glycaemia in people with metabolic syndrome (22). After 30-days of treatment there was a robust reduction in TC, LDL-C (up to 36%), TG (up to 39%) and blood glucose levels (up to 22%) and a significant increase in HDL-C (up to 40%) in majority of subjects. Bergamot extract has been found to possess anti-hyperlipidemic, antioxidant and anti-inflammatory activity (23).

Administration of berberine HCl to dyslipidemic patients for 3 months reduced TC by 29%, TG by 35% and LDL-C by 25% (26). When combined with statin therapy, berberine HCl improved lipid-lowering effect with 31.8% reduction of serum LDL-C (27). And when compared to statin alternative ezetimibe, berberine HCl was more effective for LDL-C cholesterol lowering (28).

Policosanol is a mixture of alcohols isolated from sugar cane wax and widely available as a dietary supplement. Early clinical studies from Cuba reported cholesterol-lowering effects comparable to statins resulting in the widespread commercialisation of policosanol. However these initial findings have consistently failed to have been replicated and no significant effect on TC, LDL-C, HDL-C, TG, or C-reactive protein have been observed in studies independent of the Cuban research (29,30). Policosanol is not recommended for dyslipidemia. 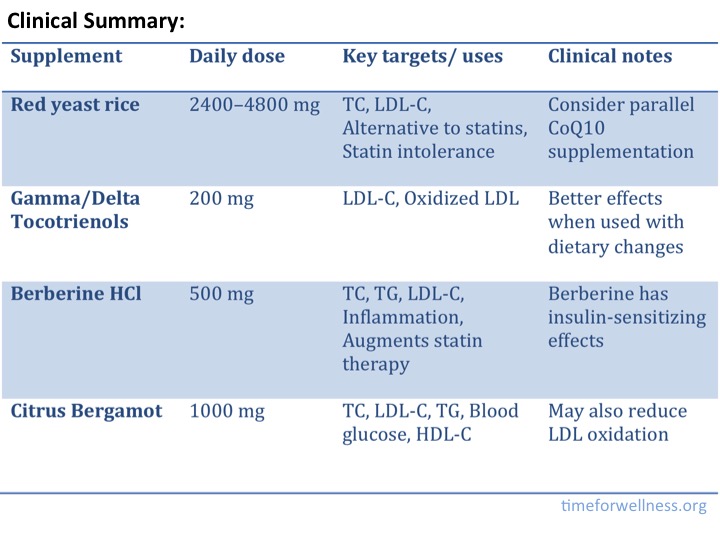 *This article first appeared In CAM Magazine, May 2015.